Please keep off the Grail!, originally uploaded by cuboidal. 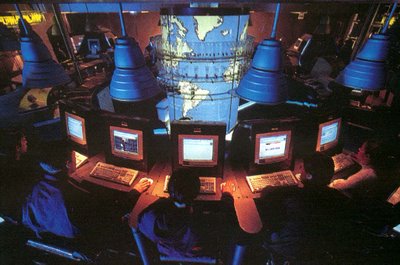 "If it were, how would we be able to detect it? First of all, we’d have to look at how it learned, how it became conscious. Presumably it would have (or will, or is) learned by watching us. It will have been analyzing our patterns of interaction, our blog posts, our photos, our search engine queries, our emails, our instant messages to one another, our e-commerce transactions. Surely, within that vast sphere of data, it will have noticed certain topical trends: a seeming obsession with sex, the ridiculous over-the-top attempts to sell products to each other. You get the idea. As an impartial developing intelligence observing the patterns of our interactions, it might make sense to not only believe these things are of supreme importance, but to try to reach us via these very same channels...." I wonder who she's talking to?, originally uploaded by Mickipedia. 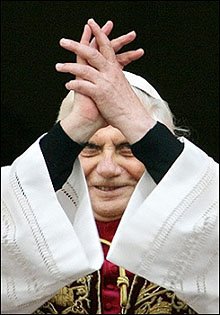 For Brian, originally uploaded by MissBeckles.

"I am only too happy to believe that Jesus was married. I know that the Catholic Church has problems with gay people and I thought this would be absolute proof that Jesus was not gay."

"What the Church leaders actually fear is the effect of the Code on young priests who might begin thinking that if Jesus could fall in love with Mary Magdalene, make love with her and still go up to heaven to sit at the right hand of God, then, what’s wrong with their entering into intimate relationships with the willing females in their flock? Actually, that is not even prohibited by the Church. What is prohibited is their marrying these girls. Because if they marry they will have to provide for their family shelter, clothes, furniture and appliances. If there will be children, these have to be schooled.

All of these will take a lot of money from the Sunday collection and other fees received by the Church for the sacraments. Then what will be left for the remittance to support the Vatican? So, please, stop all this drama about shaking the foundation of faith. As Jimmy Tang likes to put it, "everything boils down to money." IT is only a movie, and now that the reviews are in, one that is very unlikely to get a Best Picture nomination. 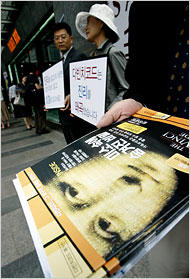 COUNTERATTACK In South Korea, "The Da Vinci Code" is greeted by protesters.

"The Da Vinci Code" has bombed with most critics, and could bomb with audiences that are not "Da Vinci" diehards. In it, a murder in the Louvre leads two sleuths to uncover a conspiracy by the Roman Catholic Church to hide the truth that Christianity as we know it is a lie. Even Tom Hanks, the lead actor, called the plot "scavenger-hunt-type nonsense." But it is doubtful the uproar will disappear.

The reason is that "The Da Vinci Code" is, in the sweep of Christian history, a historical marker — encapsulating in one muddled movie an era in which many Christian believers have assimilated a whole lot of new and unorthodox ideas, as well as half-truths and conspiracy thinking, into their faith, while still seeing it as Christianity. Call it Da Vinci Christianity.

"I'm definitely a Christian — I would label myself a Gnostic Christian," said Cliff Jacobs, 52, deputy executive director at Queens Public Television, as he left a screening of "The Da Vinci Code" Thursday night. He was referring to early Christians known as Gnostics, many of whom rejected the divinity of Jesus, but who left behind gospels that resurfaced in the last 60 years.

"I don't need someone to interpret God for me," Mr. Jacobs said. "When I want to commune with others, I go to church."

Maria Bolden, 42, a customer service representative for a cable company, said after seeing the movie, "If marriage is such a sacred sacrament, why is it such a problem for Jesus to have married?"

It is not that everyone has swallowed whole the story's sexiest heresy — that Jesus married his favorite apostle, Mary Magdalene, and fathered a line of royal offspring who still live today in France. It is that "The Da Vinci Code" reinforces doubts that some modern Christians already have about the origins of the Bible and the authenticity of the Jesus story.

The doubts did not originate with "The Da Vinci Code." Instead, the book plays off of popular interest in new discoveries like the Gnostic gospels, in feminist spirituality, and in the pagan roots of Christian traditions (for example, Easter as originally a fertility rite — why else the eggs and the bunnies?).

"The Da Vinci Code" also bolsters popular conspiracy theories about the Roman Catholic Church's power and propensity for cover-ups, an assumption that the church itself reinforced with its lack of transparency in handling cases of sexual abuse by priests.

"The Catholic Church has hidden a lot of things — proof about the actual life of Jesus, about who wrote the Bible," said Ricardo Henriquez, 25, the associate director of a senior center in the Bronx, as he waited for the Da Vinci screening to begin. "All these people — the famous Luke, Mark and John — how did they know so much about Jesus' life? If there was a Bible, who created it and how many times has it been changed?"

Mr. Henriquez, by the way, is a Catholic who was baptized and confirmed in the church, went to Sunday school for six years, and still attends Mass twice a month.

Polls have shown that one in five adults in the United States has read "The Da Vinci Code," and many more are familiar with its themes. George Barna, a pollster in California, says 25 percent of those who had read the book said it helped them achieve personal growth or understanding. "Few people said that reading the book had actually changed any of their beliefs," he said. "That was only 5 percent. Most people said that it essentially reinforced what they believed coming into the book."

What they believe is what Mr. Barna calls "pick and choose theology." It's a trend that Christian conservatives find scary and maddening, but that liberals tend to embrace as "big tent" inclusiveness.

"Americans by and large consider themselves to be Christian, but when you try to drill down to figure out what they believe, you find that among those who call themselves Christian, 59 percent don't believe in Satan, 42 percent believe Jesus sinned during his time on Earth, and only 11 percent believe the Bible is the source of absolute moral truth," said Mr. Barna, a conservative evangelical who regards these as troubling indicators.

Da Vinci Christianity is not so disturbing to Gregory Robbins, an Episcopalian who directs the Anglican Studies program at the Iliff School of Theology in Denver.

"When I talk to groups, they say, tell us about the Dead Sea Scrolls, the discovery of the Gnostic gospels, what went on with Constantine, was there a massive book burning by the church in the fourth century" — all elements woven into the Da Vinci plot, Mr. Robbins said.

Among Christians today, he said: "I have found a willingness to entertain the idea that early Christianity was very diverse. Then they're able to talk about the diversity that characterizes Christianity in the 20th century."

In the United States, many churches regarded "The Da Vinci Code" as a threat, but chose to try to educate the wayward. They set up Web sites, posted podcasts and handed out any of 46 books debunking "Da Vinci."

In developing countries — where Christianity is growing but still a minority faith in many places — the reaction from Christians was far more vehement. There were hunger strikes in India, a ban in Manila and a disclaimer before the movie in Thailand, reported The Associated Press.

Philip Jenkins, a history and religious studies professor at Penn State University, said this indicates that in the developing world, Christians still hew to the book — not "Da Vinci," but the Bible.

"In this country, even if you're a fundamentalist, reading a book is just reading a book, whether John Grisham or the Bible," he said. "If you're reading a book in India, you're probably the first generation to read, and the book has more of a sacred quality, the message carries more weight." 
Ayatollah Ahmad Husseini Al-Baghdadi: "The second clause says no law may contradict the principles of democracy. Can you imagine millions demonstrating in Iraq, calling for same-sex marriage, like in Sweden, America, and Britain? Same-sex marriages means a marriage of a man with a man, or a woman with a woman. This is a terrible catastrophe, totally forbidden by Islam. Whoever marries someone of the same sex must be killed. Both must be killed as soon as possible and must be burned as well." "Today is the International Day Against Homophobia, or IDAHO. Do your part in fighting it. The National AIDS Trust in the UK has focused on bullying in schools, saying they are "failing" young men: "We need schools to not only have policies of zero tolerance to homophobic language and behaviour but also to address sexual orientation and HIV in the curriculum. Homophobia should be as unacceptable in schools as racism." Amen. Other events to mark the day are taking place in France, Peru, Uganda, Ivory Coast, Sri Lanka, Hong Kong and Brazil." a decision's been reached in the trial of Toledo priest Gerald Robinson. And it's guilty:

"The Rev. Gerald Robinson appeared stony-faced as the jury's guilty verdict was read, and he blinked repeatedly and glanced at his lawyers before being led away in handcuffs.

The crime occurred in the sacristy adjoining the hospital chapel in downtown Toledo on the Saturday before Easter in 1980. Investigators said the nun, Margaret Ann Pahl, 71, was strangled and then stabbed, with nine wounds on her chest forming the shape of an inverted cross, a well-recognized Satanic symbol.

An altar cloth was draped over her half-naked body, which was posed as if she had been sexually assaulted.

"It was about how he could humiliate her the most," prosecutor Dean Mandros said in closing arguments. "He left a message for everyone to see … maybe to God himself."

After the sentencing one of Robinson's tearful supporters "turned to Claudia Vercellotti, a local leader of the Survivors Network for Those Abused by Priests [SNAP], who had helped reopen the case, and told her, 'I hope you rot in hell!'"

From SNAP's statement on the Robinson conviction:

More than ever, police and prosecutors have the tools and the will to go after horrific crimes, even when the defendants are seemingly powerful individuals or institutions.